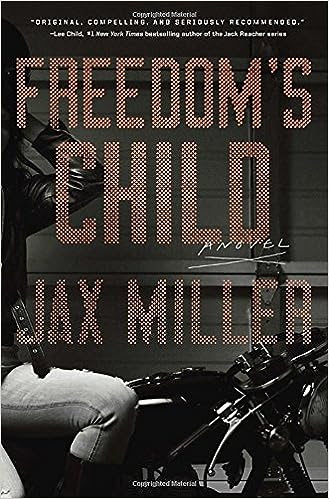 Jax Miller’s debut thriller Freedom’s Child from Harper Collins remixes biker culture, religious cults, and criminal drama to deliver a fresh one-two punch of page turning fun. This is not a true crime thriller, instead it is at once an over-the-top redemption story, a rant against staunch conservatism, an elegy for parenthood, and a kidnapping mystery. Who took Freedom’s Child? If you are a fan of crime novels, action, and misunderstood anti-heroes chances are you will read through your lay-over, or spend the afternoon on the beach flipping pages to answer that very question.

Redemption, we love it when someone hits bottom, makes a profound change, and comes out the other end transformed. Freedom Oliver’s real name is Vanessa Delaney, and she’s in the witness protection program for killing her husband. She’s crude, rude, misunderstood, and drinks like a fish. She also speaks her mind, acts independently, and is emotionally tortured for giving up custody of her kids when she was briefly incarcerated for killing her husband. She’s stuck in Painter, Oregon, tending bar at a biker hangout, populated by colorful characters, notably Passion, a middle aged prostitute with a heart of gold.

Freedom’s hard to handle, goes on her nerve, and is socially unfit. There’s kind of an aw-shucks, don’t worry about her--that’s just Freedom being Freedom-- fish out of water humor that undercuts the emotional trauma of her rape at the hands of her brother-in-law, and the rippling shock of having given up her kids, which is what readers will find sympathetic, and endearing about the character.
When the action opens she’s broken and off her meds, just as her brother in law is released from prison, and when her daughter, Rebekah, disappears. Freedom framed her brother-in-law, Matthew, and he wants revenge. He’s good looking and evil, and belongs to a twisted family led by Lynn, an obese matriarch who gives new meaning to the word slovenly. The Delaney’s want Freedom to suffer for killing Mark, and framing Matthew, and needless to say as the plot unwinds the real killer of Mark is revealed as the twisted Delaney’s get their just desserts.

The real villains aren’t the Delaney’s however, Virgil Paul and his cult of ultra-conservative Third Day Adventists are the real face of banal evil. Virgil, and his stepford wife, Carol, have adopted Ethan and Layla, Freedom’s children, and have raised them in their compound, which over the years has grown more and more conservative, and creepy. Re-christened Mason and Rebekah, the children grow up under the bright lights of the revival ministry. As Virgil’s ministry grows, so does his capacity for evil. Mason longs for college and is ex-communicated for his desire for an education, but simple Rebekah stays, and is wrapped up in Virgil’s twisted plot. Early in the novel Rebekah vanishes from a biker bar near the compound, which sends Mason, and Freedom speeding back to Goshen, Kentucky to save their loved one. Of course Mason and Freedom aren’t aware of their concurrent searches for Rebekah, but eventually the knot of action brings them together. Freedom’s redemptive story is echoed in Mason’s sub-plots; all Mason wants to do is prove himself. Even Freedom’s love interest, Officer Mattley, has his own little redemptive plot line to fulfill as he is pulled into the action via Freedom’s self-destructive actions.

But the heart of the novel is the desire for family. Family, for the most part is presented as a perversion in the novel: The Delaneys, the Pauls, officer Mattley’s broken marriage, the Custis’s--innocent in-laws of the Pauls. All of these characters have either twisted family, or live with a broken one. The families that work, or at the very least show compassion, are the families made up of like-minded connections, or friendships: Passion and Freedom, Peter and Freedom, the Amalekite and Magdaline, the Native Americans, and of course Mattley and Freedom. For these characters family is something to cherish and love and protect. Don’t let the violence, sex, and blood fool you, what matters most to Freedom is family, and through the course of the novel she gets her chance to forge her own family through fire.

The plot is a loose tangled knot of people chasing Freedom, Freedom chasing her daughter, the feds chasing the pastor, Freedom chasing the pastor, the feds chasing Freedom, etc. The colorful characters play their tropes well, the rednecks, the bikers, the skinheads, the dopey US Marshals, the tough women, even the wise, visionary Native Americans. And for the most part Miller avoids cliche through Freedom’s raunchy but likeable voice, and plenty of sarcasm. It’s a darker, seedier, more gratuitously violent Stephanie Plum adventure, save Freedom is on the criminal side of the action. Freedom’s Child is a hard R, perhaps even (rated) MA for mature, as Miller delivers the goods on the grunge and the creep factor. There’s a more or less happy ending, depending how you take your thrills, and is a snappy read for beach fun, or airport layovers. Freedom’s Child is a strong debut from a new voice. You can practically hear the hard-rock soundtrack blaring over the roar of the motorcycles.

Popular posts from this blog

Steve Bannon is often described as a Neo-Nazi, or just a Nazi. He really isn’t. That’s way too simple.  He knows his Nazi imagery and iconography, evident from the “America First” inauguration speech, the lingo of the campaign, plus the regime’s early policy. Bannon claims to be a Nationalist, one with an originalist view of the Constitution, much like Neil Gorsuch, Trump’s pick for SCOTUS.  So what do you get when you thread a Fascism fetish, Old-School Constitutional thinking, and capitalism?

A loose federal government, controlled by a strong military, the oligarchy ruling class lording over the spoils of the states which would possibly be recombined, even, into loose nations, pooling resources, and trade leverage.

Dystopia schmopia.  And how would that even happen?

We’ll have to go through Russia to get there. If you’re just catching onto Steve Bannon, and Stephen Miller for that matter, two power hungry conservatives running the Trump machine, t…
Post a Comment
Read more

Grateful to have "Young" & "From Here You Can See New Atlantis" up at @ManzanoMtn, new work in Dreamstreets,and two poems up at @PoetryShore

November 09, 2019
The folks over at Manzano Mountain Review have graciously selected "Young" and "From Here You Can See New Atlantis" (about floods and eco disasters) for their Winter Issue. You can read them here.

Dreamstreets, one of the oldest literary journals in Delaware, showcased some new poems in their Winter Issue, which you can view here.

If you didn't see my new work up at The Shore, a gorgeous new literary journal out of Salisbury, MD., check out "From End of America Fanasmagoria" here, and a poem about my cat, or catwife (that's her, above)  here.

Some new short fiction is forthcoming in 2020, and my novel of weird fiction is still forthcoming; it takes a while to edit an 800 plus page horror-thriller novel.

February 12, 2020
Grateful to have a surreal fantasia poem included in Shout! from Not A Pipe Publishing, a passionate small press out of Oregon. Proceeds from the anthology will go to RAICES, The ACLU, and other organizations to help families affected by current immigration policy.  Order here.
Post a Comment
Read more